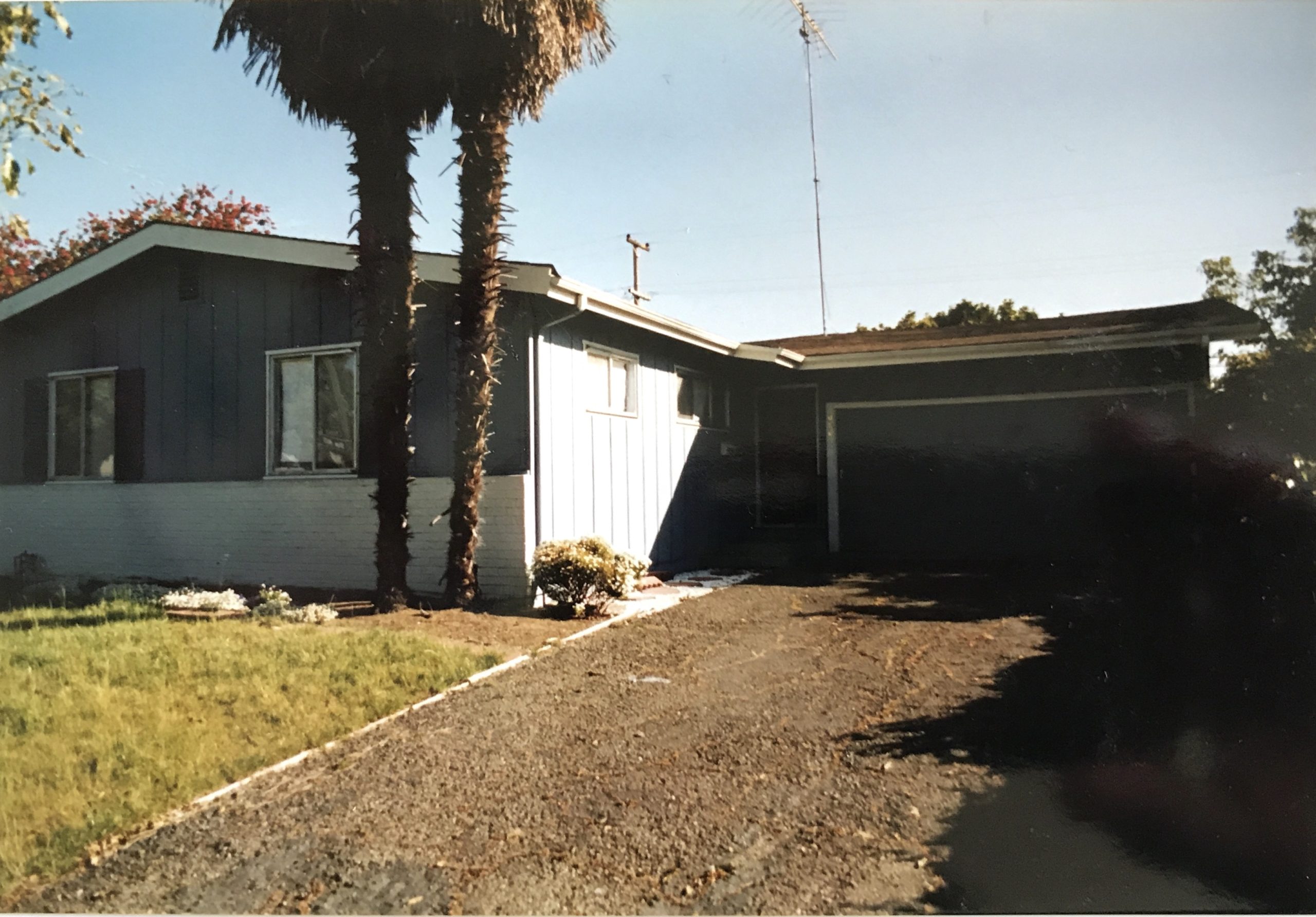 About 20 years ago we signed a contract to do a major remodel for our house, adding a second story and taking the house fromÂ  1,450 square feet to 2,900 square feet. We made some good decisions, we made some bad decisions, and we had some good luck. After 20 years, I have a better perspective about the project. Here is what we learned.

Now at that moment I could look up and see blue sky because our roof had been removed. I could look out to the street in front of our house even though there were 3 rooms between where I stood and the street, because almost every wall in the house had been stripped down to the studs. There were big holes, trenches really, in the floor near my feet from the work that had to be done to add additional foundation to support the weight of a second floor.

One of the best decisions we made was to get out of the way. We have known families that live in one room of the house or in the garage during the remodel (in fact our contractor Clayton did that for his own remodel), but that can slow things down. For one thing the workers need to clean up the job site to a different level each night.

It took a lot of stress out of the process for us. We moved to a nearby 2 bedroom apartment and freed up from home maintenance spent our weekends doing more fun activities. It worked out so well that in the middle of a big home remodel my wife wondered why we had a house anyway. Now she tells me.

When you clean out your house one thing you learn is that “we don’t need more space, we need less stuff”. We packed up a third of what we owned into containers that we had picked up and sent to storage. We packed up a third of our stuff and we brought it with us to the apartment and we got rid of a 3rd of our stuff. Did we really need our notes and textbooks from college if we had not looked at them for more than 10 years?

One thing we screwed up was we missed the fine print that when you moved back to your house you need to give the storage company 2 weeks notice for when you want your stuff back. We got by for a week or two with a borrowed dorm fridge because our fridge was one of the things in storage.

The demolition phase happens very very quickly. Large men climb on your roof with chainsaws and in a matter of hours you don’t have a roof. Sometimes it happens a bit too quickly. Joan came by the house during the demolition and the back wall was gone. “Wasn’t that supposed to stay?”, she asked. TheÂ  demolition crew chief said that “yes, the guys got a bit carried away”. Our contractor felt so bad that he offered to replace that wall with french doors instead of the picture window that was part of the original plan. He paid for the french doors, we paid for a new step outside them and they became one of the best features of the new house.

There were the less welcome surprises like discovering asbestos during an inspection and needing to do asbestos abatement which added a month onto the schedule. If you have a house that was built in the 1950s in the United States you should pretty much assume you have asbestos. It was not in the “cottage cheese” ceiling coating as we expected but in the linoleum.

We also found plenty of rot and water damage in the bathrooms once the subfloor was exposed. Not much of a surprise in a house that was almost 40 years old. There was termite damage that needed to be replaced. That’s what happens when you build houses where their used to be fruit orchards.

The single best feature in our remodel was the kitchen. We went from what a former college roommate of mine called a “one butt” kitchen to one that we can’t get people out of during a party. Surprisingly the kitchen is the one thing in the house not designed by the architectural firm. Kitchen design is a special skill. They took a shot at a kitchen design but made the mistake of listening to what we said we wanted.

Our contractor was not concerned. “I know a guy”, he said.Â We accompanied him to a nearby Home Depot where one of their kitchen designers designed out kitchen… while we watched. It was fascinating. It was an artform. How about this he would say… click, click, drag, swipe, click, drag,Â  click and there was a design for a kitchen and a list of all the cabinets (Home Depot cabinets of course) you would need to build it. “Wow, that looks pretty good, what if we just changed…”. Click, click, drag, click, click, swipe, drag. “Yeah. Yeah that’s really good!”

Getting your work triangles right so that the sinks are near the stoves and oven are really important. I thought a prep sink seemed like a silly idea but we use it all the time.

We did make one mistake not with the design but with the components. We bought a JennAir gas stove with a cool disappearing vent (currently broken) and with a great feature that it will cycle the gas element on and off so you can get a lower temperature on some of the burners (we have had it fixed 3 times).

Fortunately for most of the decisions we needed to make only one of my wife or I cared. She really cared what the doors looked like. She had previously replaced all the doors in the house with paneled doors instead of plain flat ones. But she had no opinion what the shape of the roof was. She picked the sinks. I talked to the architect about the floor plan which she had a harder time picturing.

The only disagreement was the style of lights on the garage. At one point our contractor threatened to not put lights on the garage if we could not agree. We finally settled things in a time honored way. I got the last word… which of course was “yes dear”.

Our project actually finished ahead of schedule in part because we made decisions quickly so the contractor and his crew were not waiting on us. But that does mean that some of the decisions got a bit rushed. My wife chose lights for the bathroom “just for now” that she lived with and hated for almostÂ  20 years before she replaced them.

Floorplan – Where Does Laundry Belong?

One of those floor plan decisions was where do you put the laundry room. If you put it on the second floor near the bedrooms then it is convenient to where the clothes, clean and dirty, are stored. If you put it near the kitchen it is convenient to the living spaces in the house. The decision was finally made to put it upstairs because that meant the old laundry room, in part, became a pantry. That turned out to be a great choice for us even though we ended up using the bedrooms on the first floor more than we expected.

While the question of who lives here would seem to be obvious, with 20 years hindsight it has changed much more than I expected.

When we started the construction my wife and I had two kids, Mike and Liz, who were in elementary school. So we ended up with a design with 3 bedrooms on the 2nd floor (all of us), a music room onÂ the 2nd floor for my son’s drums and my wife’s keyboard, a guest room downstairs and my office. But… things change.

We had 5 of us at times when we had an exchange student or when my Australian cousin lived with us for 2 years. Then we had two of us because both kids left for college. Then my wife’s mom took a fall at 90 years of age. Suddenly we had her in the guest room and my wife’s niece Julie (God send) and her dog Addie (dumb as a post but adorable) downstairs and the music room became the office and podcast studio. The drums had been sold by that time and the keyboard had gathered dust.

Add in an international student living upstairs to get back to 5. Joan’s mom lived with us for 4 years before she died. Julie graduated college and moved on but by then we were hosting international students and hosting people through Airbnb (seeÂ Welcoming Strangers â€“ Becoming an Airbnb Host).

So… none of that was part of the original plan. If we knew then what we know now we might have put in a seperate entrance for the guest room downstairs and thought about how we could make it a more stand alone apartment.

Would we have designed my office differently if we knew it was going to be an office? Maybe. Maybe we would have put in built-in shelves. But on the other hand it was useful to be able to turn an office back into a guest room so that a caregiver could be near Joan’s mom.

The only room in the house that didn’t change was the family room. It is still the same bright room that made us fall in love with the house in the first place. We no longer use the fireplace and have a flat screen TV above it instead, but basically the room is the same as it was. Of course that also means that the old sliding glass door that exits to the backyard has not been replaced since it was added by the previous owners. I now wonder if we should have replaced it while we were at it.

While We Are At It

Of course “while we are at it” may be the 5 most expensive words in the English language. We did a previous kitchen remodel because a portable dishwasher died.

We had friends who replaced a kitchen because a burner went out on their stove. I can relate to that.

But there are some things that we were glad we tackled while we had the floors and walls ripped up. We had all the pipes and wires in the house replaced. We also strung dual cable and CAT 5 wire to everywhere we thought we would need them. This was still pretty early to have every room wired for internet. If I had not intervened our electrician would have strung the wire from room to room to room instead of having each cable and wire come back to a wiring closet in what was then my office. Of course what we didn’t know was that we would end up using wireless routers mostly.

A big house remodel is a sometimes stressful, sometimes fun, always expensive undertaking. It is fun watching the framing come together quickly. It is frustrating waiting on asbestos abatement or inspections. It is great seeing a design come from a vision to a reality. Everyone should do it once… and maybe only once. 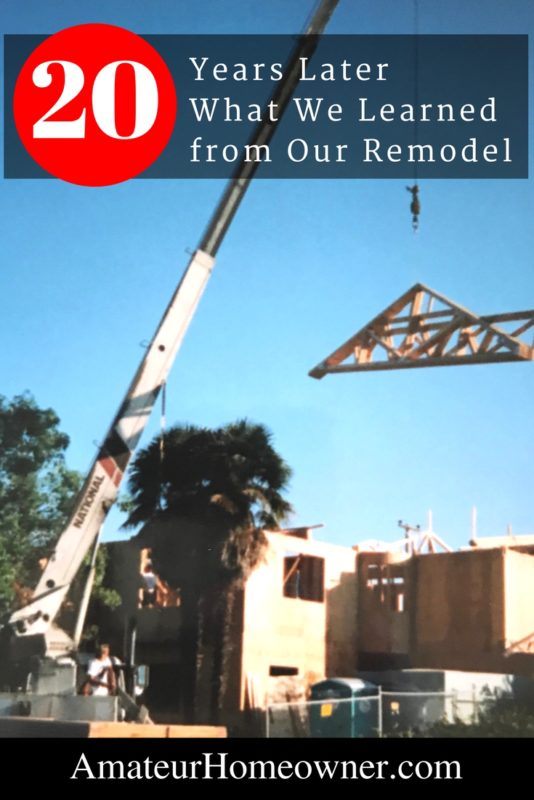