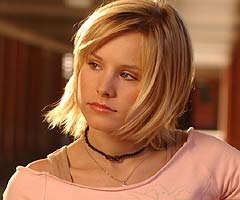 It sounds like a guilty pleasure, but I have recently fallen for the TV show Veronica Mars on UPN (Tuesdays, 9PM). To hear the description of the show you would think it is a remake of either Nancy Drew or Twin Peaks, neither of which were a favorite of mine. The back story for the show is that Veronica Mars was the daughter of the sheriff of Neptune California, a town divided between the haves (kids of movies stars and software moguls) or have-nots (motorcycle gang members, children of maids and butlers). Veronica is one of the in kids. Her best friend is Lilly Kane, and her boyfriend is Lilly’s older brother Duncan Kane. The Kane’s father owns a local computer software company that is the town’s biggest employer. One year before the first episode, Lilly Kane is murdered. When Veronica’s father implicates the elder Kane in the case, he is voted out of office, his wife leaves him and becomes a private detective. When Veronica sides with him, she is cast out of the in crowd and becomes a pariah at Neptune High. She helps her dad with his detective agency and is trying to both track down her mother who has disappeared and solve the murder of her best friend.
Frankly, when I read that it does not sound like a TV show I would like. What works for me though is that despite this dark story underneath, the show has a lot of wit and humor. And while the high school “kids” are played by actors that are generally in their 20s, the cast works for me. I particularly like the banter between Veronica (Kristen Bell) and her father (Enrico Colantoni, from “Just Shoot Me” and “Galaxy Quest”)
Veronica Mars: [Veronica’s Dad just came home] And…
Keith Mars: [Happy] Who’s your Daddy?
Veronica Mars: I hate it when you say that.
Keith Mars: This is important, you remember this, I USED TO BE COOL.
Veronica Mars: When?
Keith Mars: ’77. Trans-Am, Blue Oyster Cult in the 8-track, foxy, stacked blond riding shotgun, racing for pink slips. Wait a minute, I’m thinking of a Springsteen song. Scratch everything. I was never cool.