The tour of Antelope Canyon had been one of my biggest goals on this trip and it did not disappoint. I arrived at Lower Antelope Canyon at about 8:30am. No other tourists were there yet and the canyon was still closed from the effects of a flash flood which had washed through the canyon 2 days earlier. Several people were trapped in this canyon in a flash flood in 1997 and drowned. Members of the Navajo family that ran the canyon were busy trying to throw sand on some of the mud that had washed into the narrow “slot” canyon. So I waited and chatted with one of the young men until the canyon opened at 9am. He said that the day before the water had been up to his shoulders in part of the canyon.
When they opened the canyon there were still only 5 (2 couples and I) tourists waiting to enter so the young man who I had been chatting with led us to the very narrow entrance to the canyon where we climbed down. The entrance was probably around 18-24 inches wide and looked more like a crack in the ground than any kind of canyon. The tour of this canyon is supposed to be self-guided but I got almost a special guided tour as I followed the young gentleman down into the canyon. 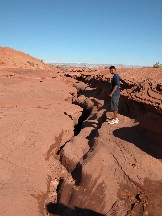 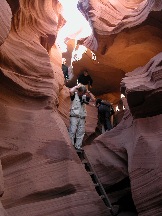 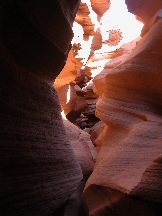 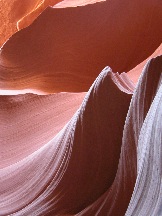 One of the couples was from Switzerland and the other couple was from England. It seems as if almost half of the tourists I met on this trip were from Europe.
As soon as I climbed down into the canyon I was entranced with the warm colors and the swirling patterns carved into the Navajo sandstone. For at least the first hour it seemed like we had the canyon to ourselves. Apparently many people have heard that the light is best around noon, not realizing that noon is the best time to view the Upper canyon, not necessarily the lower canyon. Finally after spending around an hour an a half wandering the canyon, I exited past the growing number of tourists.
My next stop was the Upper canyon just the other side of the highway. I paid for my ticket but was bumped from getting on of the last two seats on a tour so that they could seat the couple behind me. I had to wait an additional half hour because of my temporary singleness. The upper canyon is reached via a rather bumpy ride in a pickup truck through the dry wash that connects the upper and lower canyon. 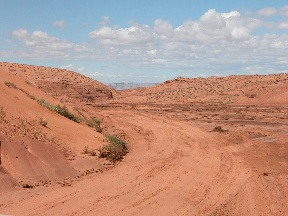 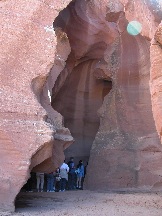 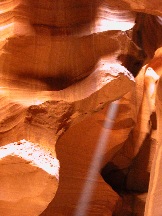 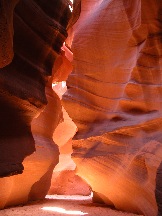 The upper canyon was much more crowded than the lower canyon. It is both more well known and more easily accessible. The entire walk of this shorter canyon is level ground. I arrived at the canyon around noon, as was my plan and was rewarded with shafts of light shining down to the valley floor. When one of these would appear there would be a mad scramble as 30 different photographers tried to vie for position with their cameras and tripods. The upper canyon was also darker than the lower canyon. Both of these factors probably made the lower canyon my favorite of the two.
After Page, I turned North and drove through the Grand Staircase and Escalante National Monument. I stopped at a visitor center where I learned that creation of this National Monument was one of the last acts of President Clinton and that Utah was none to pleased with the decision in which it “lost” an area the size of the state of Delaware. Numerous dinosaur fossils continue to be discovered in this area, but most of the monument is only accessible via 4 wheel drive, so I continued to Bryce. One the way I finally found a cell phone signal for my GSM phone at Kenab, UT (which the signs proudly proclaim as Utah’s “Little Hollywood”) and was able to check in with home and send a few emails from my cell phone. I stopped at the bakery by the Foster Family steakhouse on the way to the park and picked up home fried chicken for dinner. The teenage girl at the cash register wore a shirt that said “will work for shoes”. I also passed Ruby’s Inn at the park entrance where you can stay in a teepee if you did not bring your own tent. 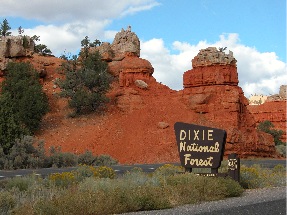 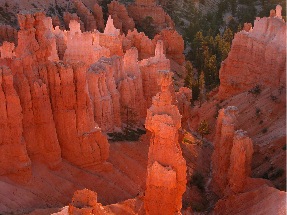 I arrived at Bryce National Monument shortly before dark. After a quick trip to view the canyon, I signed up for a bus tour early the next morning, pitched my tent and turned in early.