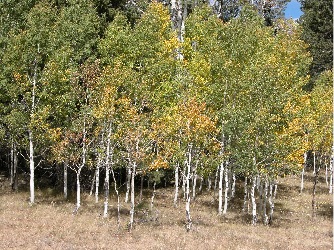 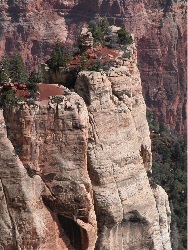 With no working lantern I went to bed early, but slept poorly. Throughout the night the tent seems as if it would blow away with me in it. I had no trouble getting up to watch the sunrise, but the canyon was still very overcast and cold. After watching the sunrise I packed up my tent, showered and returned the lodge to to relax, write in my blog and watch the continuing light show over the canyon. After a while I headed down from the rim towards Page. Coming down out of the park I came first to the well-named Vermillion Cliffs. Following these cliffs I came to the Navajo bridge on the Colorado river and then turned South to get around yet another line of cliffs. It is a wonder that people ever found their way around this region. I had a reservation for the next day for a photographers tour of the Antelope Canyon, but as I have been warned the tour company seldom gets enough people for that tour, so it had been cancelled. Even if they had called my cell phone to tell me, my GSM T-mobile phone had not had any reception for a day and a half except for a few minutes in the middle of the night at the rim when it connected just long enough to deliver 18 pages. 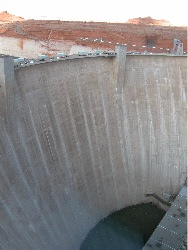 The light in the canyon is supposed to be better in the morning so I had time to kill. The campground in town (named the Lake Powell campground, but with no view of the lake) is more like a parking lot than a campground. I finally bought my Golden Eagle pass and got a campsite by Lake Powell in the Glen Canyon National Recreation Area. I set up the tent and then took a free tour of the Glen Canyon Dam. The tour guide is very knowable and we get to both walk on and descend into the dam. The tour guide told us that 13 workmen had died building the dam. Wise guy that I am, I asked how many tourists they had lost on the tour of the dam. “None, but we did lose one dog” was the surprising response. It seems that they used to allow people to bring their dogs on the tour. One lady thought that it would be a good idea to take a picture of her dog standing on the lip of the dam. Went she turned around her dog was now called “Spot”.
After dinner I return the campground. After searching for a power outlet in the campground near a place to sit I discover the laundry has both and is open 24 hours. Which is where I write this while I start watching “The Passion of the Christ”. I am also charging my camera batteries in preparation for the day ahead. Two thunder storms and two car alarms led to not the most restful night’s sleep.