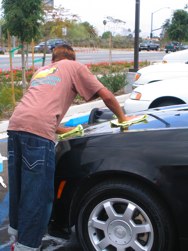 It is quite possible that the cashier actually meant it, but her demeanor seemed to say “my boss makes me say this to everyone”. Granted I was no longer a cheery person myself by that time. I had walked over to Stevens Creek Chrysler to pick up my car which was having a new part installed. They had called me to say my car was ready. Ready did not mean, apparently, that all the paperwork was done because I had to wait 10-15 minutes for someone to walk over my paperwork from the service group.
The curious thing to me is that I have purchased 3 of my last four cars from this dealership. So I have spent over $40,000 in this spot. Now perhaps to them that is not a lot of money (certainly less than one Viper) but to me it is the third largest purchase behind my house and my kids college tuition. Yet every time I come here I get the distinct impression that my time is not valuable. I pre-purchased a service plan for one of my cars so I always take it here. But even thought it would cost me more money I consider if it would be worth going down the street to Jiffy Lube where they seem to understand I am in a hurry.
I still get a Sunset magazine every month from the realtor we bought our house from 21 years ago. It arrives “complements of Enis Hall” as a gentle reminder of what a great jobs she did for us. It is probably not surprising that we have referred her to a number of friends. She is “our realtor” even though we have not bought a house in over two decades.
Last weekend my wife ran into a fellow starting a car hand washing business at a nearby service station. She learned he was an out of work construction worker who had moved here from Texas. She came home knowing his name and some of his history which she learned while she was pumping gas. As she went to wash her windshield he jumped in and did that for her. She came home and told me his story and I suspect has mentioned him to others as well. Here was someone that understands that his business was based on repeat business and repeat business would be helped by having a relationship. He wanted to be “our car wash guy”.
I think the car dealership could learn a bit from the car wash guy. When I get my car back it always still has the trash in it, plastic on the floor, the service numbers on the mirror. That always strikes me as “we could not be bothered to throw these out because you are not that important to us”. I don’t think of them as “my car dealership”. They won’t be the first place I go when I want to buy a new car.
Have a nice day.