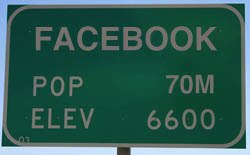 If you have ever been in a foreign country you have probably had a conversation similar to this:
“You are from California? I have a friend in California, maybe you know him!”
We always laugh when this happens because California has roughly 30 million residents and is larger in size than many countries (it is about the same size as Japan).
But if you had a conversation where you told someone you belonged to a particular church, graduated a specific high school in a given year, or had worked at a small company you would not be surprised to have the same conversation. What is the difference? The difference I would suggest is that a high school class is a community but California is not.
The point my seem obvious but I am surprised that this point of view does not always carry over to the internet. I was listening to the latest live call-in show for the excellent podcast For Immediate Release when I heard a caller express a comment that people should get involved in a community like Facebook. I am not trying to pick on Shel and Neville for their excellent show, but this comment mirrors an understanding of Facebook and similar sites that I have heard expressed on many occasions.
Facebook states in their press area that they currently have 70 million active users which is more than twice the population of California. Facebook and the other social networking sites host a great number of communities but are not communities. My daughter is a member of numerous communities on facebook like her college classmates and high school classmates. My son has many of the same high school friends but is attending a college all the way across the country. Their college communities don’t overlap. They are a similar demographic of course but demographics do not a community make. I also belong to facebook but my facebook friends tend to be podcasters and Amateur Traveler podcast listeners. I could try and befriend all my daughters classmates (creepy) but I would be treated as what I am, an outsider.
The distinction here is important. Many people confuse a community with a website or with a set of features. But communities are people. They are people who share something other than bandwidth. They share values, or experiences or interests. I have seen a number of people find no value in facebook or other social networking sites until they realize that they can use it to reconnect to their high school girlfriend or college roommate. They don’t find any value in it until they find community.