Mid-flight Loretta realized that her fanny pack with her credit card, ATM card and other things had probably been left at a store in the SFO airport. We tackled the Heathrow airport with a noticeable lack of direction and leadership as Rick (exhausted) did not want to take charge and no one else seemed to take the roll. Finally Susan and Jackie decided to stay with Loretta and see if she could contact credit card agencies, etc while the rest of the group followed me to the central bus station in the airport. After wandering around asking people we were able to find the bus to Windsor. I had changed money in SFO so I bought the bus ticket for the group having assumed the role of Dad by this time (being the only one asking directions maybe I was playing the role of mom).
It was about a 45 minute bus ride to Windsor which left us about 2 hours there but it was a wonderful stop. It was filled with tourists as I recalled but we found a good place for lunch across from the castle at the Hinde and Garter hotel. 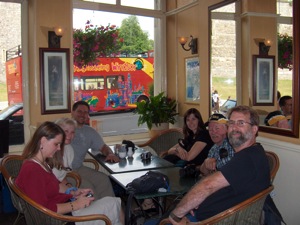 We then spent the rest of our time wandering in smaller groups taking pictures and shopping. It was a wonderful stop compared to sitting in the airport. I had asked someone at the information booth if there was a better or closer place to hang out but they said not in a nice neighborhood. As it turns out the other 3 did manage to catch a taxi to Windsor for about 30 pounds each way(vs about 4 pounds round trip for the bus). They skipped lunch and did the self-guided tour of the castle instead. 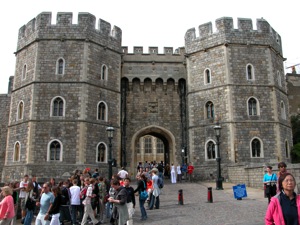 When we went back to the bus station we went to terminal 4 for our flight to Africa where the two groups reconnected. The train to terminal 4 is the Heathrow-Paddington train but free and in the other direction.
At the terminal Loretta was finally able to connect to Citibank to cancel her credit card but still could not connect with Wells Fargo. We had been told to double check if our luggage was on the flight when we checked in and Rick found out that one of his two bags had not made the flight. We flew on a 767 to Kenya with some very nice flight attendants.
One flight attendant was convinced I was an actor or looked like one but could not think of his name. Another one commented that he liked my Amateur Traveler t-shirt and we had a nice discussion about podcasts. I sat next to Susan. I only slept about 4 of the 8 hours on this flight.