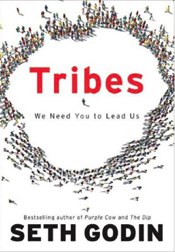 When I read Seth Godin’s book Tribes about discovering the group of people who want/need you to lead them I understood it and appreciated it. But I think I didn’t get it in quite the same way as I did this week.
the problem
As many of you know my podcast the Amateur Traveler was in the running for a Lonely Planet Blog Award. This competition had two phases. The first phase was a popularity vote and the second phase was a vote of the judges. I was confident I would do well with the judges but I have always hated the popularity vote. In high school I was neither a social pariah nor was I class president. As a shy person by nature I hate shilling for votes. But this was a contest I wanted to win. When the contest started I was about 500 votes down before I even knew I was in the running. I sent emails to my small email list, twittered, got my friends to twitter for me, brought it up at work, mentioned the contest on my podcast and I closed the gap some but I was still way behind.
the power of mailing lists
But then my friend Craig Martin of the Indie Travel Podcast sent an email to his mailing list and rocketed into first place. So I went to my email box and found the emails for people who had written me about the show and ask them to vote for the show. A funny thing happened. They voted and in great numbers. When I send a twitter message my typical response rate is around one click for every 50 people who follow me. This was more like one response for every 3 emails. That was amazing enough but the next part is what really surprised me.
my tribe
No one wrote me and said to stop bothering them. Instead many people wrote emails like these:

I voted for you. I love your show, although I don’t get a chance to listen to it quite as often since my daughter Chloe was born in August. The first time I did listen to Amateur Traveler after she was born the topic was Acadia National Park. That was a great surprise because we live in Maine (about 4 hours south of the park), and although I’ve done a lot of traveling around the country and in Europe, I haven’t been to Acadia since I was 8 years old.
It was a nice reminder that even though our travel experiences will be different now, there are some great places to explore right in our own state. I also purchased a state park pass recently, and can’t wait for summer! Now if only this snow would go away…
Thanks for taking the time to put out the show. It is appreciated.
Nicole
I voted for you and I really enjoy the show. Best of luck.
Thelma in Missouri
Done. It´s a pleasure to help you and give something in return for your great podcast
Jose
Good luck Chris! Thanks for all the great shows and all the time and effort you devote to them.
Lottie
Thanks for the email. Already voted for you – both from home and at work, so the site won’t accept another email from me. 🙁
Good luck, and thanks for your continued dedication to the podcast. I thoroughly enjoy it. You continue to open up small pieces of the world to those of us who have an interest in travel but limited opportunity. It truly is appreciated.
Thanks, again, and keep up the good work. Blessings,
Gerry

Thanks for the email? People were thanking me for asking them to do me a favor. People were actually glad to help. Oh, that’s what Seth Godin meant!

It starts with permission, the understanding that the real asset most organizations can build isn’t an amorphous brand but is in fact the privilege of delivering anticipated, personal and relevant messages to people who want to get them.

Building a tribe is about providing value. When people appreciate what you have been doing for them they are glad to return the favor.
postscript
Ironically, I won the vote handily and then lost the judging. The judges were not in my tribe. I can live with that.